The current opioid addiction epidemic has been termed the worst drug crisis in American history by a near-endless number of news outlets. Current death-rates from opioid overdoses are killing more people per annum than AIDS did during the height of the HIV/AIDS crisis during the 1990s.

Over the course of the past decade, addiction has spread from the urban environments that once contained the vast majority of its victims, and overrun suburban and rural middle-america. Areas that light up brightest on the current addiction map of the US, are the Southwest and Appalachia regions. As of 2012 (which is the last available year in this particular dataset), there were 12 states within the United States, that had more opioid prescriptions written, than human beings living within the state in question.

These numbers provide an interesting cross-section of middle-America, instead of the major cities associated with hardcore drug-use that you might expect. NYC, LA, San Francisco, Miami, Seattle, Portland, and all the usual suspects, are notably absent, because this dataset is tracking legal prescriptions, and not accounting for heroin use, which is the drug that many opioid-dependent individuals end up switching over to, when they can no longer legally obtain the high doses of opioids upon which they have become physically dependent.

Progression of an Epidemic Addiction is an equal-opportunity medical condition that doesn’t discriminate. Between 2010 – 2014, the number of overdose deaths from heroin, have increased by:

The official statistics that have been compiled offer almost no news that is encouraging. In a 2015 speech, President Obama noted, “More Americans now die every year from drug overdoses than they do from motor vehicle crashes. The majority of those overdoses involve legal prescription drugs. I don’t have to tell you, this is a terrible toll.” 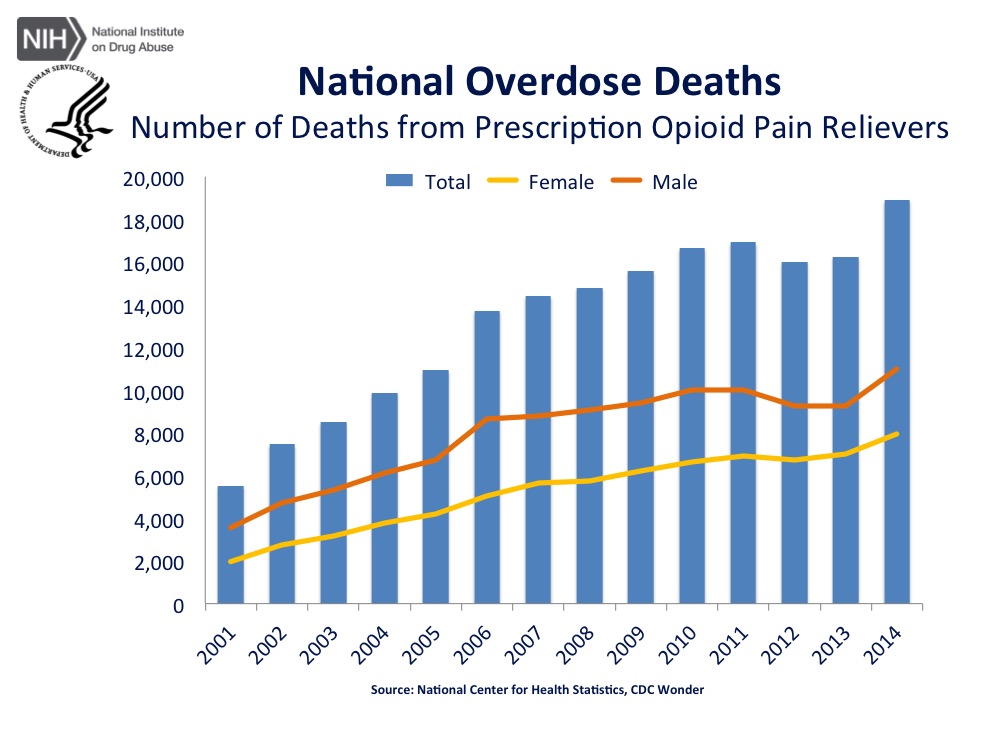 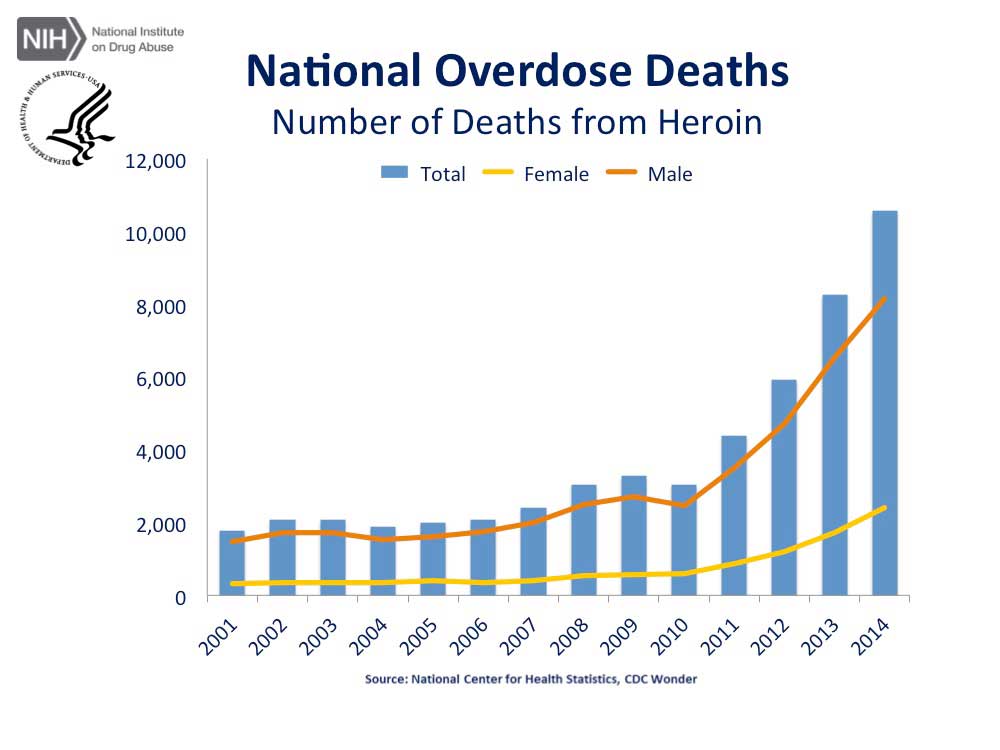 Truth Initiative also offers the following statistics related to opioid use in the United States:

These opioid addiction statistics paint a troubling picture of opioid abuse in the United States. Additional statistics also reveal that the opioid epidemic affects individuals across the country.

As the aforementioned statistics indicate, America’s opioid addiction epidemic is a national problem. The opioid epidemic also plagues individuals of all ages – even babies.

The use of opioids during pregnancy is problematic for both moms-to-be and their babies. If a pregnant women engages in opioid abuse, her baby may be susceptible to a variety of short- and long-term health problems, including:

In the United States, a baby is born suffering from opioid withdrawal approximately every 25 minutes, according to the National Institute on Drug Abuse. For every opioid that a mom-to-be ingests, the risk increases that her baby could suffer immediate and long-lasting health issues.

Conversely, with a safe, effective, and dependable opioid addiction treatment strategy, a mom-to-be – or any other opioid addict – can receive the necessary support to manage addictive behaviors.

The National Institute on Drug Abuse points out that several medications are commonly used to treat opioid addiction, and these medications include:

How Did we Get Here?

So how did this situation happen in the United States? In one word: OxyContin.

Towards the end of 1995, the FDA approved the narcotic analgesic branded as OxyContin. In its first year on the market, OxyContin generated over $45 million in sales for Purdue Pharma. 5 years later, by 2000, that number was at over $1.1 billion. An increase of over 2000% in just over 4 years.

Ten years after, OxyContin had generated over $3.1 billion in profits and accounted for roughly 30% of the entire prescription painkiller market. Within a decade, a single, small, privately-held, family-owned corporation, controlled nearly a third of the entire US market for narcotic analgesics. That’s a pretty amazing accomplishment that most drug dealers would envy.

When Purdue Pharma introduced OxyContin to the marketplace in the mid 90s, the marketing it employed was highly similar to Bayer’s original marketing materials for heroin (which claimed that Heroin® was a safer, non-addictive form of morphine. In retrospect this statement was wishful thinking at best). The marketing for OxyContin was misleading enough, that in 2007 Purdue Pharma pled guilty to knowingly misbranding the drug, “with intent to defraud and mislead the public,” and paid $634 million in penalties (which is one of the largest settlements ever paid in U.S. history by a pharmaceutical company. It produced a minimal dent in their profits).

According to The American Journal of Public Health, Purdue Pharma more than doubled the number of its sales and marketing representatives between 1996 and 2000, from 318 to 671. The average bonuses being paid out in their marketing department were $70,000 per annum, with some sales reps bringing home over a quarter million in annual bonuses. In 2001, by which time Purdue Pharma was well aware of the problems OxyContin was causing, they spent over $200 million in marketing OxyContin alone.

Where Do We Go From Here?

While the last 15 years have seen an increase in the number of medications legally available for opioid maintenance within the United States (most notably buprenorphine, in the Subutex and Suboxone formulations), there has been absolute silence and a total lack of development in effective opioid detox medications. Your treatment options are pretty much the same as they would’ve been back in the 1980s; very little — bordering on nothing — has changed in the past several decades.

Fortunately, ibogaine treatment for opiate addiction is extremely effective for many of Purdue Pharma’s pain-management products, including, but not limited to: OxyContin, hydromorphone, oxycodone, fentanyls, codeine, MS Contin (controlled-release morphine sulfate), and hydrocodone.

Most of Purdue Pharma’s narcotic analgesics are highly compatible with ibogaine treatment for drug dependence. Their drugs are usually pure agonists, and relatively short-acting opioids, with no extended half-life. In short: they’re very similar to heroin. At Clear Sky Recovery’s ibogaine clinic, we have extensive experience with treating patients for OxyContin dependence.

If you, or a loved one, are experiencing the consequences of OxyContin dependence, please feel free to contact us, and we’ll help you assess the suitability of ibogaine drug treatment for your particular situation.

At Clear Sky Recovery’s medically-based ibogaine treatment center, ibogaine therapy is administered by our board-certified physicians. Here, we provide a safe, effective, and painless detoxification from opioids and other addictive drugs.

Ibogaine treatment for opioid addiction has been shown to help eliminate up to 98% of drug withdrawal symptoms, as well as alleviate PAWS. During ibogaine therapy, Ibogaine HCl is used to help an opioid addict return to a pre-addicted state. Ibogaine HCl resets a patient’s drug dependence and helps him or her painlessly get rid of addictive behaviors.

Following an ibogaine treatment program, a patient will have a foundation in place to enjoy a drug-free lifestyle. Each patient is provided with a personalized aftercare treatment plan designed to deliver long-lasting results. With this plan, a patient is well-equipped to avoid an opioid addiction relapse.

Statistics, Data and Maps, courtesy of the CDC and NIH.